The business case for net-zero

The last six months have seen several large companies from a range of sectors announce net-zero targets for GHG emissions. Visa, Volvo, Apple and others have all lead the way, and even banks like Credit Suisse have been changing their lending practices based on a borrower’s emissions. Royal Dutch Shell, Eni, Repsol and Total are seeking to reduce their emissions by one third by 2030. BP has plans to reduce oil production by 40% and focus on other areas, like renewables, significantly changing their own business model. Alone, BP will invest €200 bn aiming for 50 GW of renewable installed capacity by the end of the decade.

Tech is doing something similar. Google is seeking to increase its use of renewable energy. Amazon has included a reforestation pledge as a part of its net-zero strategy, as has Apple, whose devices will be carbon neutral within the decade. Microsoft just pulled an underwater data centre off the seafloor of far northern Scotland, after a two year experiment aiming to reduce data centre emissions.

Why these changes? Governments across the world are setting net-zero targets which have evolved from being ambitious targets for climate activists into government policy. Companies and corporations currently have a window of opportunity to self-determine their pathway to net-zero. This is due to two factors: relatively low regulation on emissions-intensive products and weak carbon pricing. However, the temptation to wait and see what technological solutions is also strong. So, should companies work towards their own net-zero targets now or should they wait?

The business case for moving now – or planning for it - is strong. Governments have relied on emission pricing to incentivise decarbonisation, but the cost of carbon has stayed relatively low. Though renewables have flourished and will outstrip oil and gas production for the first-time next year, carbon pricing has not become prohibitive enough to force emissions-intensive industries to innovate towards net-zero. This should be seen as a window of opportunity.

Many companies have not incorporated a pathway towards net-zero into their business strategies because they do not see an increased risk or benefit to do so. However, as governments set their various net-zero timelines, they are increasingly starting to consider the both the regulations that could deliver these and funding green projects to accelerate emissions reductions. Therefore, strategic companies should assess their emissions exposure and plan to transition, whilst carbon prices are low.

For the European single market, the emissions trading system, which is 15 years old, probably has until the end of this decade to demonstrate significant emissions reductions, especially in industry. If it does not, the EU is accelerating its climate ambition and expects its economies and industries to decarbonise. It will regulate for this rather than miss its ambitious targets. This is also the case in other markets with cap and trade carbon pricing.

In some cases, governments are not waiting, and product bans are already scheduled. In the UK, the automotive industry will no longer be able to sell internal combustion engine vehicles from 2035, sending a clear message to auto manufacturers. The refrigeration sector is phasing out fluorinated gases, globally. Single-use plastics, made from petrochemicals, are also being banned. De facto product bans are also creeping in with planning permission refusals for high emissions/pollution businesses, bans on the registration of diesel vehicles and compulsory building requirements for devices like heat pumps in new builds. These initiatives are designed to address emissions and prove that regulation will move in sectors that do not.

The key point is this. By 2050 (and in some cases earlier) net-zero emissions will be a jurisdictional requirement for serval countries. It is an entirely reasonable assumption that these countries will have regulated to get to that target. Some governments will watch and wait for market-based solutions to do the heavy lifting. But if the trajectories are wrong at the end of this decade, much tougher approaches must be anticipated. Now is the time that companies need to move beyond setting a target and start addressing how they will transition towards net-zero. Refusing to make these decisions now amounts to a failure to plan for a predictable regulatory future. 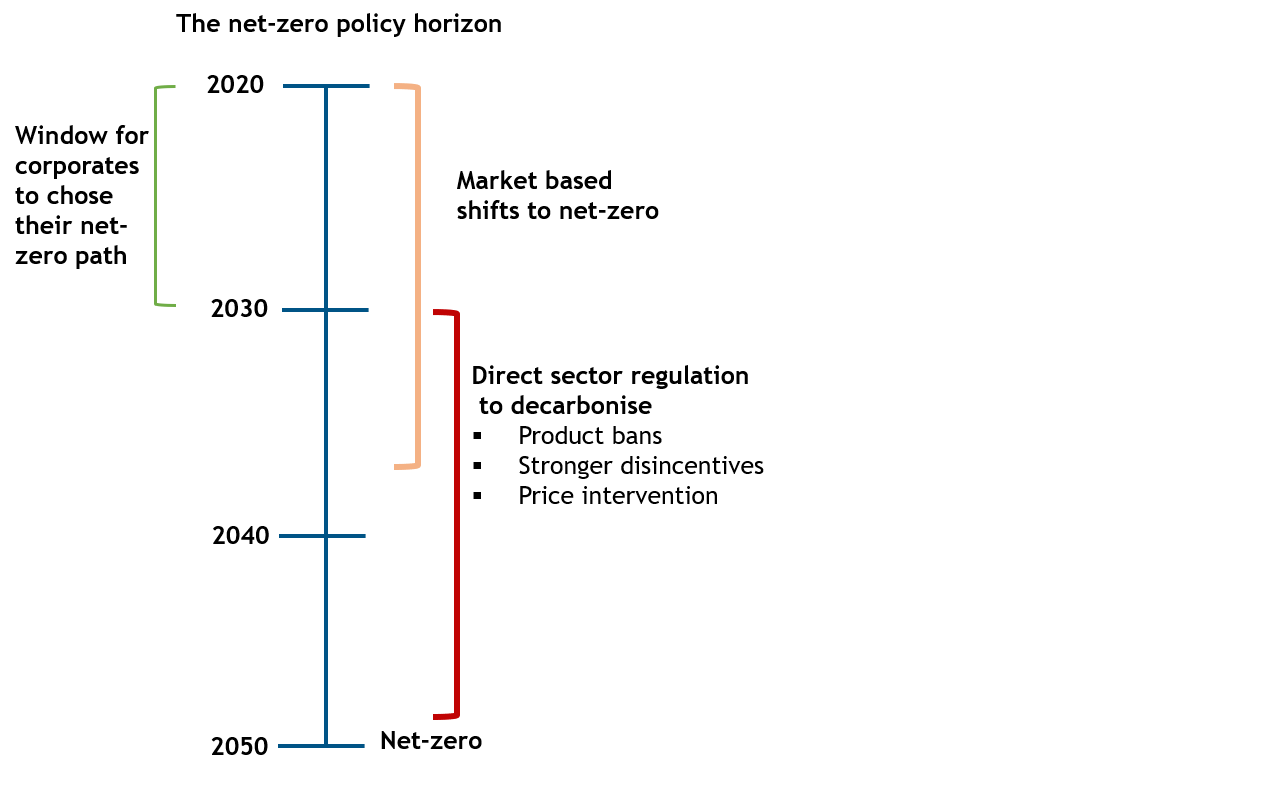 For those who questioned the sincerity of President Joe Biden’s rhetoric around addressing climate change, his first few weeks in office has likely cast those doubts aside. Biden has signed more executive orders (over 50 as of this writing) than any president before him. The most prominent ones include re-joining the Paris Agreement and revoking the permit for the…

Covid-19 and the future of food systems

Policy addressing health, climate, and poverty has often occurred in silos. Covid-19 has emphasised the interconnected nature of each of these areas, and particularly in how they relate to food systems. Global Counsel Chairman, Peter Mandelson recently discussed these issues with Special Envoy on Covid-19 for the World Health Organization, David Nabarro, where they looked…