Following an agreement among EU foreign ministers in late August, on September 9th the European Council adopted a recommendation by the European Commission to suspend the 2007 EU-Russia visa facilitation agreement. As of September 12th, Russian applicants for short-term visas face a lengthier, harder and much costlier process. Similar restrictions for long-term visas could follow – and even a wholesale ban on Russian tourist visas.

Some member states see the new visa regime as still too soft and would rather include a near-complete “Schengen visa ban” into the next, eighth, EU sanctions package. Coinciding with the EU Commission’s recommendation, the three Baltic states announced that Russian holders of Schengen visas, which they stopped issuing a while ago, can no longer cross their land borders. Poland will follow from September 19th. Finland, which acts as an important transit and shopping hub for Russian visitors, is in favour of a ban but is awaiting a broader consensus in Brussels.

With the noticeable exception of the government in Helsinki, which has traditionally issued by far the most Schengen visas, the debate takes place between two geographies. On the one side are the member states with a border to Russia, which issue many but not most Russian tourist visas and are usually not among the main holiday destinations, and on the other are southern EU members that share no border with Russia but issue most visas and receive most tourists. 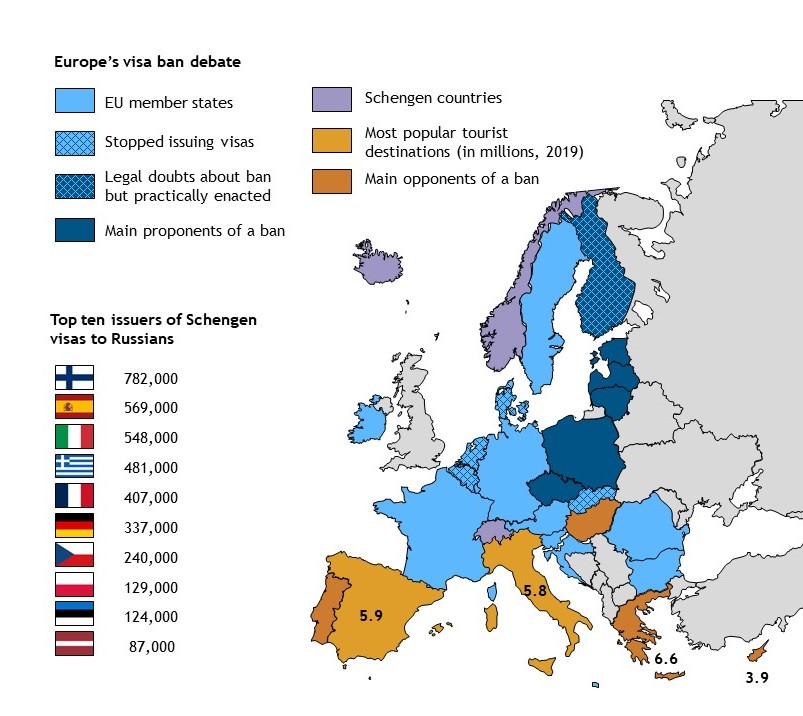 Even if implemented only regionally, substantial visa restrictions could influence the position of remaining EU and Schengen countries in the long run. But so could their failure. Measured by their inflation rates of more than 20%, the Baltic states are facing the hardest economic headwinds in the EU. By cutting off Russian tourists, governments are killing “the hen laying golden eggs”, especially in the run-up to the winter tourist season in which Russians traditionally play an important role.

To uphold their values and principles, governments will therefore need to think about how to alleviate the impact on the hospitality sector and compensate for the loss of revenue for the economy. Otherwise, it will be even harder for them to convince other member states to follow suit, particularly in the EU’s visa-ban-opposing South, where tourism makes up a significant share of national GDPs.

While all capitals agree that pictures of sunbathing Russian tourists contradict the EU’s efforts to sanction the Kremlin’s invasion machine and support Ukraine’s defence effort, the main arguments in the debate revolve around the effectiveness of a tourist visa ban, rather than business impacts.

Opponents warn that only a third of the Russian population owns a passport that allows them to travel abroad. The share is significantly higher in Moscow and St. Petersburg – about 50%, but even with this half of Russia would still be unaffected. And most importantly, the EU could end up ultimately hurting those whose values align with Brussels rather than the Kremlin, as some of the most frequent jetsetters close to power in Russia possess the financial means or second passports to circumvent the entry ban.

Other counterarguments point to the fact that two years of pandemic-related entry restrictions, which were lifted only in July, have changed the patterns of Russian tourists abroad. Russian applications for Schengen visas have dropped by 80%. In the summer of 2022, almost 90% of Russian tourists went not to Europe but either to cheaper and more accessible Turkey, which launched a new airline servicing the Russian market, or Egypt, the UAE, or Georgia’s breakaway region Abkhazia.

The announcement by the Russian authorities to include all European countries in a relaunched scheme for electronic visas suggests that the Kremlin does not consider visa retaliation. This might be a reflection of the tourist numbers where Europe currently has only a tiny fraction and therefore the impact of the EU ban is seen as insignificant or, more likely, a desire not to antagonize the undecided EU members outside the two camps, who are so far rather sceptical about a ban.

Member states like Germany, whose 235,000 Russian residents build the largest Russian expat community in the EU, position themselves between the blocs and advocate for more individual sanctions instead of a blanket ban. The visa debate therefore also foreshadows discussions about new pressure points that the EU could use against Russia, e.g., further restrictions on banking or other services for citizens. The US does not support a comprehensive visa ban either and would like Brussels to focus more on economy-related measures, such as price caps for Russian oil and gas.

Unlike the suspension of the visa facilitation agreement, which was a relatively easy administrative act, an EU-wide ban of Russian tourist visas would likely be part of a new round of Russia sanctions. Estonia’s foreign minister Urmas Reinsalu and Germany’s Annalena Baerbock have already called for the eighth EU sanctions package, but this would require hard negotiations – and even harder to reach unanimity – in Brussels. It remains to be seen if the Baltic states can lead the way again and convince the rest of the EU to implement wider Russian tourist sanctions.